We take your security very seriously. In order to protect you and our systems, we are making changes to all HSBC websites that means some of the oldest web browser versions will no longer be able to access these sites. Generally, the latest versions of a browser (like Edge, Chrome, Safari, etc.) and an operating system family (like Microsoft Windows, MacOS) have the most up-to-date security features.

If you are seeing this message, we have detected that you are using an older, unsupported browser.

See how to update your browser

What is World Water Day?

On March 22 every year, World Water Day is observed. Originally pioneered by the United Nations in 1993, the day’s aim is to bring attention to the liquid resource that we cannot survive without, yet can be easily taken for granted. Despite the necessity, many still struggle to access it – 26 per cent of the world’s population still lack access to safe drinking water and 2.3 billion people live in water-stressed countries. In bringing these matters to light, World Water Day also supports the objectives of the Sustainable Development Goals, which were introduced by the UN in 2015 with the wider objectives of ending inequality and extreme poverty by 2030, and to protect the planet. Out of the 17 goals created to achieve this, ranging from education to energy, the theme of water falls under the sixth goal to ensure the availability and sustainable management of water and sanitation for all by 2030.

Each year focuses on a different theme set annually by the UN, with this year’s theme being ‘groundwater’. So what is it? Essentially, groundwater is the water found below the earth’s surface, held within bodies of rock and sediment underground known as aquifers. This type of water accounts for around a third of freshwater resources globally, and is topped up through rain and snowfall seeping into these water-storing rocks. Eventually, groundwater finds its way into other more accessible water sources, ranging from small springs and wetlands to oceans, helping to moderate water level fluctuations and providing stable-temperature habitats and nutrients for wildlife.

Not only is groundwater key in the healthy functioning of ecosystems, but it is also a vital source in our everyday lives. Indeed, groundwater supplies almost half of all drinking water in the world. Even further, 69 per cent of the water we extract from groundwater and other freshwater sources is used for agricultural purposes as shown in the chart below, with industry (including power and energy generation) and individuals making up the remaining usage at 19 and 12 per cent, respectively.
So it’s clear that a delicate balance is needed between recharging and abstracting this water. Overexploitation stemming from the level of abstractions outweighing that of recharging leads to a depletion in groundwater tables. This in turn could start a domino effect on all that rely on its consistency, from reduced crop yields to wetland degradation and lower water quality.

Out of total global water, freshwater accounts for only 2.5 per cent 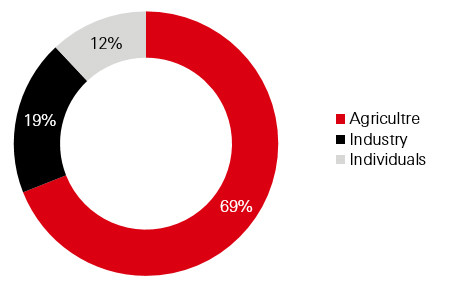 Why is the focus on water so important?

To understand why the focus on water is so important, we must first bring the levels available into perspective. Water is a finite resource, and though 70 per cent of the earth’s surface is covered with it, not all is fit for purpose or accessible. As per the chart below, out of total global water, freshwater accounts for only 2.5 per cent. And to top it all off, almost 70 per cent of this freshwater is locked up in glaciers and ice caps, leaving only 30 per cent available as surface and groundwater.

A breackdown of earth’s water

Now consider the demand. Not only do we rely on water for agriculture, but it’s also a vital component of other key production processes. Take global power generation for example, 90 per cent of which is water-intensive, according to the UN1. And with factors like rising population growth and urbanisation (shifts in population from rural areas to urban), there’s an increased demand for water as well as the added pressure on sources supplying to densely populated locations. At the moment, 40 per cent of the world’s population lives in water-stressed areas2.

All of this has contributed to global freshwater usage increasing dramatically over the past century, as shown in the below chart. The pressure on this limited resource is set to rise. The OECD has projected a 55 per cent global increase in water demand between 2000 and 2050, with manufacturing, electricity generation and domestic uses being the main drivers3. The number of people living in water-stressed areas is also expected to increase to 50 per cent by 2025, leaving 1.8 billion people living with absolute water scarcity4.

The OECD has projected a 55 per cent global increase in water demand between 2000 and 2050, with manufacturing, electricity generation and domestic uses being the main drivers

Economically, a continually shrinking and stressed global water supply leads to losses in agriculture and other water-related businesses, thus feeding into output – some regions are at risk of growth rates declining as much as six per cent of output by 20505. Despite these harrowing projections, corporate action through water governance is still lacking. There’s a low level of water reporting for even the largest companies - less than 40 per cent of MSCI World companies actually report water intensity metrics6. In a world where increased water scarcity will be a given, monitoring and encouraging a reduction in companies’ water intensity will be important for investors, otherwise it may represent an unaccounted source of financial risk.

What are some ways to invest in water?

Financing will play a huge part in the solution of meeting the rising demand for water and the maintenance of the finite water supply. In fact, the World Bank estimated that an investment of least USD114 billion is needed annually over the current decade7 in order to achieve safe water, sanitation and hygiene access for all by 2030, under Sustainable Development Goal 6. Private markets will therefore need to take an active role for this target to be reached.
Water utilities are facing operational risks with stresses on current freshwater supplies. Key to the solution is innovation. This also applies to businesses that similarly have a high usage of water in their revenue-generating processes, but are embedding inventive techniques to reduce their water intensity. This goes further than just water utilities, and can capture companies that are diversifying water sources to minimise reliance on freshwater withdrawals through desalination for example, or making water storage facilities more efficient to avoid evaporation.
Water infrastructure providers will also be integral in the innovative management of the liquid resource. This is an important aspect in the water management transition, as aging infrastructure and inefficiencies in processes cause a significant amount of water loss, especially in irrigation. An estimated 45 billion litres of drinking water are lost globally every day through leaks in old pipeline infrastructure8. In order for assets to get back to good form, structural investments over prolonged periods are necessary, thus representing a long-term investment opportunity. Take the US for example, where the Environment Protection Agency estimates that water infrastructure will need an investment of USD473m over the next two decades9.
Moreover, companies that are exploring new water sources and new treatment techniques will help alleviate the stress that a growing population puts on existing water sources. Businesses involved in water treatment and purification include any related to technology, equipment or services used to process water for viable use.
On top of it all, the potential impact of private finance focusing on water is not only significant in maintaining a healthy water supply and meeting rising demand, but also translates to the return on investments. According to the World Bank, every dollar invested in water access and sanitation results in an average USD6.80 in returns10.

According to the World Bank, USD114 billion is needed annually over the current decade in order to achieve safe water, sanitation and hygiene access for all by 2030

Back to top
Beginning of dialog window. It begins with a heading called "You are leaving the HSBC AMG website.". Escape will cancel and close the window.

Please be aware that the external site policies will differ from our website terms and conditions and privacy policy. The next site will open in a new browser window or tab.
I understand, let's proceed Cancel
Beginning of dialog window. It begins with a heading called "Terms and Conditions". Escape will cancel and close the window.

I have read and accept the terms and wish to continue into this site. I confirm that I am an Institutional Investor based in Bermuda.

Page down to activate the acceptance button.

The acceptance button is now active

At HSBC we use cookies to help ensure that our website and services are able to function properly. These cookies are necessary and so are set automatically.